With that in mind, let us look at the way humans are attracted to each other, and in what numbers.

A dominant standard narrative exists in many parts of the world that people “should” be exclusively attracted to the opposite gender than their own. Many people still today believe that being attracted to people of your own sex is unnatural and wrong. The “fix” is to ignore and deny those “impulses” and work hard to stick to the standard view: 100% heterosexual during the course of one’s lifetime, as depicted in the chart 1.1 below. 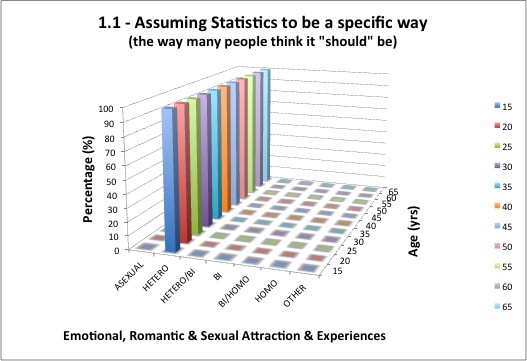 Fortunately, this viewpoint is being increasingly challenged and corrected. We are slowly and surely reaching a consensus that humans don’t choose who they are attracted to and what their sexual orientation is. The fact that there are many places in the world that have started collecting statistics on this is a sign that it is being recognized. These statistics tell us that there are around 15% reported bi and homosexual people around the globe, shown in the chart 1.2 below. Read more about how these data were gathered here. 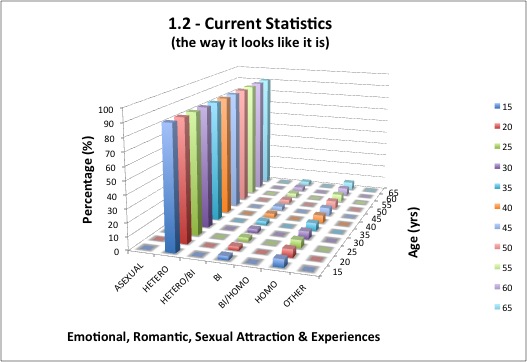 I believe we need to further deepen our understanding of the actual data with more meticulous statistics by creating more thorough and in depth questions to ask. If the questions were even more carefully formed, the cultural conditioning removed and people able to honestly express who they are truly attracted to without societal scrutiny, the picture might look more like the chart below (1.3). My hypothesis is that we would arrive at a more distributed, bell shaped curve of human attraction and experiences. On both ends we would have the minority of people who are either asexual or identify themselves in some other less common way. 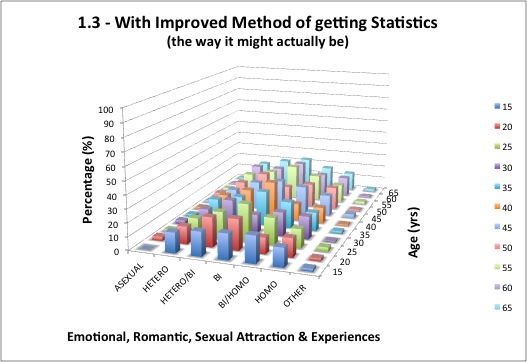 It might be surprising to imagine that such a high percentage of people could be neither heterosexual nor homosesual, especially since the picture is so different from what we currently know. It is important to note that our current statistics about how people identify themselves sexually may not fairly represent who they are attracted to or have intimate experiences with. For example, there are many straight identified men who have sex with other men, for reasons that are unrelated to their orientation. Sexual flexibility is something that a growing number of people seem to be talking about and once the conversation fully opens in our mainstream discourse, we might be surprised to find out just how diverse humans are with their sexuality. This is already clear to an increasing number of people who are already involved in this conversation.

Additionally, due to the fairly established understanding of the fluidity of human sexuality (especially female), people’s attractions would also likely change throughout the course of their lives, thus, the data would fluctuate along the age axis as well. It would look like a large, wide highway where everyone is constantly taking left and right turns as they go along, thus constantly changing the statistics landscape (which is also displayed in the graph 1.3 above).

Number of Partners at a given time

Here is another leap into a narrative that is very dominant in our society, the one about how many partners a person has at any given time throughout their lifetime. Note that in the upcoming graphs below, having “one partner” includes either monogamy (only one exclusive partner in one’s lifetime) or serial monogamy (more than one exclusive partner throughout one’s lifetime). “Two or more partners” can include polyamory (people being committed long-term to more than one partner), open relationships (having a primary partner and consensual lovers outside of that relationship), promiscuity (people not committing to any specific person or number of partners) & infidelity (people who commit to a relationship but create other relationships without the consent of their partner(s)).

The chart 2.1 below shows the widely spread belief that humans ought to be able to commit to one partner only. This seems to be acceptable even if people have quick turnaround, back-to-back relationships (serial-monogamy), as long as the person is involved with one person at a time. Despite the attraction to other people and the impulse to become involved with others, the standard narrative prompts us to do our best to stay faithful to the one person we choose (especially once we have found “the one”). Just like many cultures and belief systems seem to largely prefer the idea of people being straight, having one romantic/sexual partner is something that seems to be the “standard norm”. This is additionally reinforced with the belief that after becoming partners with someone, one would either naturally or with hard work become attached to and “in love” with  this person only, and would be essentially “immune” to having it happen with anyone else. And if it did happen that someone ended up having a connection with someone else, for many people it would mean that the love in the main relationship is gone (“zero sum” approach), that the person never loved the person in the first place or that the person who “fell in love” with someone else is unable to commit to anyone. 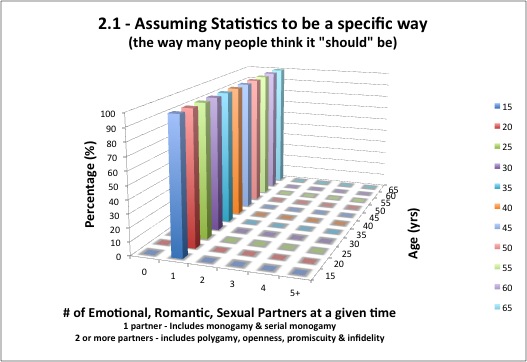 Note the similarity between the graph 2.1 and the very first graph 1.1. It seems that the mainstream culture tends to understand and view human bonding through a “power-law distribution curve”, where the data is dominantly concentrated along one specific value on the graph. As I will explain through this example as well, I propose that the data for numbers of partners humans would naturally have are likely to be more evenly distributed across this 3D spectrum, rather than in a uniform, static block of data.

The actual contemporary statistics on the number of partners humans have (shown in the chart 2.2 below) seem to paint an even more distributed picture than the chart 1.2 in the first example above. I used the information from a few different resources to arrive at the graph below. One part is from infidelity statistics from Kinsey institute that claims that up to 20% of people have affairs. Journal of Marital and Family Therapy presents even higher percentage infidelity rates, up to 57%.  I find it especially compelling that the percentage of both men and women who say they would have an affair if they knew they would never get caught could be as high as 70%. I decided on the fairly low rate of 25% infidelity rate as an approximation. I used only 60% of these infidelity statistics considering that is the amount of the population that is married, which gave me 45% of people who have faithful exclusive partners. As for the 40% non-married people, based on the statistic that about 53% people say that they date more than one person simultaneously, I split them half-half arriving at 65% people with only one partner and made a guess that the remaining 36% would drop off steadily with more partners.

It seems that the difference between the statistics displayed in chart 2.2 above and the potential statistics that I propose in chart 2.3 below does not  seem very large. Again, my guess is that the actual distribution of data would resemble a bell-curve, with people who are not interested in having any intimacy at all on one far side and people who would tend to have a very large amount of intimate partners at a given time on the other. 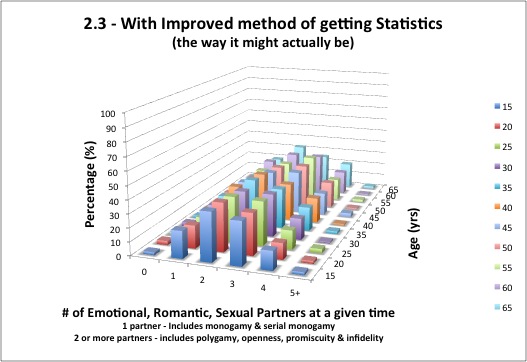 People’s choices on how to maintain and grow the relationship would be significantly different if they correctly understood how humans bond. I hope the charts above can give you an idea as to just how diverse we as humans are. What is important is to arrive at an honest conversation about this issue in any given relationship.

For example, when people are in a monogamous relationship, yet attracted to other people, they usually talk themselves out of acting on those impulses. Bear in mind that a similar approach is still applied by many people to those with feelings of attraction to one’s own sex. As a result, many try to “snap out of it” and lead heterosexual relationships. Fortunately, we seem to be increasingly reaching a consensus where one’s attraction to a specific sex is not a choice and it needs to be understood, accepted and not judged. I propose reaching a similar consensus about our understanding, accepting and not judging the issue of attraction to multiple people. And I do acknowledge that we would accept not only that there are people who are attracted to more than one person but also that there in fact, are people who are, as the standard narrative dictates, truly wanting to bond with only one partner (at least at a given point in time).

Recognizing this could help people seeking monogamous arrangements understand and accept the people who are interested in having more than one partner; and vice versa. Conversely, ignoring this and insisting, for instance, on pairing a person seeking a strictly monogamous arrangement with a person wanting a polyamorous arrangement and forcing only one arrangement ( out of either of the two) on both would be analogous to for example, the insistence of pairing up a heterosexual person with a homosexual person into a heterosexual relationship. It all changes if the two can successfully work around their differences toward developing a healthy, mutually accepting and supportive relationship.

Another interesting thing to observe is that monogamy seems to be a sub-group of polyamory. If one has a primary partner, and very casually and rarely involves oneself in a relationship with someone else (columnist Dan Savage coined this type of relationship as “monogamish”), that person is in reality, monogamous with his/her partner most of the time. Considering how often I hear people praise monogamy and observe them practice quite recurring serial monogamy, breaking up with someone every few months (that is if they manage to pull it off without any cross-over), I can be cheeky and claim that a “monogamish” couple could purposely “break up” for an evening when one partner wants to hang out with someone else, and then “make up” the next day. They can then successfully call themselves “monogamous”. Of course, inconveniently, the contract of marriage doesn’t allow for this witty arrangement to easily happen, but that’s a conversation for another time.

Note also that since humans can simultaneously bond in three distinct ways with different people (long term emotionally, romantically and sexually), we could create three separate graphs for each one of those ways of bonding. Some people might happen to bond on all three levels with the same person for a long period of time, whereas a much larger amount of people would likely be drawn to having these arrangements with different people in the course of their lifetime. And it could work out much better for everyone to start honest dialogues around all this, rather than to convince themselves that they have to behave in some externally, socially imposed ways.

Additionally, I grouped men and women all into the same graph. I did all this for simplicity sake. Any rigorous empirical study would likely have dozens of different graphs to paint the appropriate picture of human bonding, intimacy and sexuality.

Accepting both of the above topics into our lives will involve two steps: first, truly recognizing and accepting one’s own natural tendencies (that will also likely change in the course of the next ten, twenty or fifty years) and second, and equally important, recognizing and accepting other people’s natural tendencies, which, as I hoped to show in this article, are as diverse as people themselves, constantly changing and evolving.