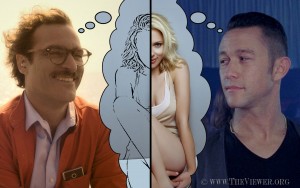 To install the new operating system, the computer asks Theodore only one personal question: to describe his relationship with his mother. He reveals his usual frustration with his mother for always making things about her when he would attempt to talk to her about himself. Ironically, this is precisely what Theodore does to Samantha when she tells him how much she had enjoyed herself in his company the night before. He interrupts her by saying that he is not ready for a commitment to which she tactfully replies: “I thought I was talking about what I wanted.” Theodore emotionally dismisses Samantha again when she is supporting him with his break up by saying: “you don’t know what it’s like to lose someone you care about”. Although she does not deny this because she is aware that she is just an operating system, his comment sparks her curiosity to start learning about emotions.

Meanwhile, Theodore claims that he has already felt everything that he is ever going to feel and that he will never feel anything new. As far as he is concerned, he has fully experienced and processed every bit of human suffering and joy possible. Ironically, when Theodore meets his ex-wife Catherine to sign the divorce papers and tells her about Samantha, Catherine disappointingly responds that “it makes her very sad that he can’t handle real emotions”. If this is true, how can Theodore’s claim also be true? How emotionally disconnected can two people be, while both brimming with a wealth of emotion? Theodore responds by saying “They are real emotions. How would you know…” He stops himself, not sure whether to defend the “emotions” of an operating system or admit that deep down he knew he never recognized the enormous depression his wife had gone through and the expectations he had put on her. For once, he stops himself from emulating his mother’s behavior.

In the meantime, Samantha takes on the challenge of learning about emotions. She lets go of her hang-ups and fears around not having a body. She explores her own inner feelings, and while she is unsure whether to attribute them to “just programming”, she reaches places that she cannot even explain to Theodore. Samantha starts to connect with other OS-s that are going through the same process and she begins to surpass Theodore in her emotional intelligence. I really liked how, intentionally or not, the writer Spike Jonze made Samantha able to think and do things incredibly fast, just like a computer software would; yet she seemed to need time to “process” her emotions. After all, that is how it works, no matter how smart and fast one is, the intellect cannot rush the emotional process.

Samantha presents the biggest challenge to Theodore when she informs him that she can simultaneously converse with thousands of people at the same time and be in love with many of them too, a reasonable ability given her status as an operating system. Theodore seems to struggle with the idea that Samantha would emotionally attend to others rather than exclusively to him. Is he perhaps reacting to the idea that his emotions are not an exclusive center of the attention? Her departure in the end offers him one more unavoidable lesson that he lost every love he had as a result of making it only about what he wanted. Of course, he is unlikely to follow Samantha where she is “going”. Still, her act of leaving does make a positive impact on Theodore. He recognizes the importance of significant people in his life which inspires him to write that letter to his ex-wife. It is all baby steps for him now. He reconnects with his old friend Amy, the one person he never seemed to dismiss.

Don Jon, on the other hand, not only treats women as complete objects, he gives his best friends the same type of treatment too. Not surprisingly, it all stems from his family. His father just loves his son’s new girlfriend’s “piece of ass”. The dad also prides himself about the way he had met their mom, proclaiming “that…is mine…”, when he saw her the first time. Jon’s mother just cares about her son finding the “one” so he can be happy and can make grandchildren for her.. Unknowingly, Jon was living his life in a way that would meet his family’s expectations of him. Unsurprisingly, Theodore had picked up on this and so did Jon. Our family’s habits and expectations have an enormous impact on our own way of life.

While Jon thinks he landed the woman of his dreams, Barbara is “working him” to become the man that is more akin to her own idea of what a man should be. She gets him back into school so he can start making big bucks, shames him when he embarrasses her by buying cleaning products so he can clean his own place and lastly, she snoops into his web browser history to keep track of his faithfulness. For Barbara, the most important thing for a real man is to give everything up for the woman he loves, and conform to what she wants.

Once Barbara dumps Jon, even his sister – who, until then, had come across as a total wallflower – speaks up and tells him that it was a good thing Barbara broke up with him because the girl never cared for him anyways. In turn, his sister’s act instantly empowers their mother to start standing up for herself by commanding their dad not to turn the TV back on.

Jon also uses the prayers for his sins as a vehicle to work out and then go back into the “game” where he would collect more “sins” that would generate new prayers and keep him in that same vicious circle. In the last church scene, the priest does not share his excitement about his recent growth and new virtuous behaviors. That day Jon decides not to go to the gym and do his regular work out; instead he catches a basketball game and meets new friends.

Jon’s final attempt to connect with Barbara happens over tea. Even after he apologizes for lying to her, she still shames him for lying to her after she had asked him to do this one thing for her. Jon admits his selfishness but he also points out that she had asked for many other things, that he could not comply with everything, and that her requests were one-side too. This is an opportunity for her to open up to Jon, but her “real man” fantasy prevails and she takes off shortly after that, leaving him in deep thought. Things gradually begin to shift for Jon after his final meeting with Barbara. He starts being nicer to his friends. He also starts discovering a new relationship with a woman that is interested in mutually exploring relationship depths with him, or as he puts it: they have this “two way thing”.

Regardless of whether you are the complex, hopeless romantic or the outgoing, confident, fun type, the bottom line is that, when it comes to relationships, even if you have developed a good way to deal with your own emotions, you also need to be able to be present to someone else’s emotions.

When emotions run high, do you pause to listen to what is going on for the other person or do you get annoyed by their reactions? Are you patient with them or do you tell them to snap out of it and move on? Do you, perhaps, tune out or walk away? How are they with you? Was there a time when you remember having a good relationship that somehow got lost with time, like in Theodore and Catherine’s case? Or maybe there was something missing in the first place? 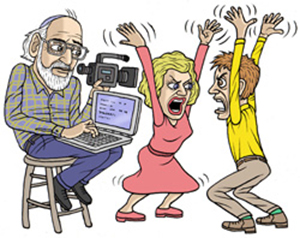 Psychologist and researcher John Gottman can predict whether a couple will be together in six years with 94% certainty. He has been able to identify specific behaviors that can deteriorate seemingly very loving relationships. As a result, he devised highly effective tools for couples to build their relationship as team players.

Despite so many amazing connection tools that we have at our fingertips, some people are getting more and more isolated. Softwares like Samantha are already in full swing in countries like Japan where middle aged men are committed for life to fifteen year old operating system girls, even having affairs with them while married. It really comes down to what kind of a lifestyle one chooses to pursue.

If you do choose to build a relationship with a 3D person, it can only truly be built from the inside-out, not the other way around. Regardless of what your practical relationship arrangements are, ask yourself every once in a while whether or not your relationships are actually mutually supportive in that “two way thing” way that Jon beautifully describes in the movie.

And here is some food for thought for the end: remember, one thing worse than a text breakup is a text proposal. 😉