I am currently treating an injury which, it turns out, was caused by a prolonged, repetitive posture misalignment at my workspace.  I had already done substantial efforts to try and properly align my computer set up, but this incident demonstrates how even a very small misalignment can sneak up on us even when we are trying to be very diligent and careful.

Through accumulation of exercise and work, I had developed pain in my right chest muscle (the pectoralis major). After a thorough examination,  a very skilled physiotherapist worked on releasing the knots caused by too much tension from the muscles: he then described precisely how the pain was coming from a very specific right-twisting movement (torsion) I had supposedly been doing consistently during the preceding days/months/years. I needed to find out what this movement was! 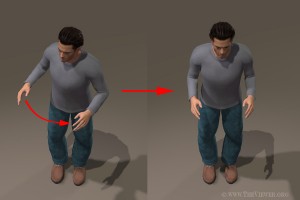 He told me to watch for any gesture that would resemble that twist and mainly to notice when the sore muscle (which was even more sore now that he worked on it) would get engaged. That would be an indicator that I am doing it again. Some of my guesses included guitar playing or often wearing a bag on the same shoulder, but things didn’t get fully clear until I got back to my computer’s work desk.

Once in front of the computer, I looked down and saw that my posture was exactly as the physiotherapist had described it. I had spent years holding a mouse  this way, especially since the last year involved months of basically non-stop computer work. I was first and foremost amazed by the physiotherapist’s remarkable precision in describing the body positioning that was hurting me. Since one of my best friends is an occupational therapist (the field of study dedicated to solving these problems), I’d already gotten several valuable clues around these things from him throughout the years.  The problem is that standard keyboards usually have a section with extra numbers keys that extend the shape of the keyboard to the right, consequently pushing the mouse further that way, and along with it, my hand, forcing my torso to rotate (twist) to accomodate it. This subtle misalignment created a strain in my right chest muscle, causing it to get overworked, strained, and eventually, injured.

The solution was to align the body into a position that’s as “neutral” as possible. To accomplish that, I got a slim keyboard (my laptop’s keyboard worked just fine for this) which cleared room for the mouse, automatically allowing my body to stay in proper alignement. Even after I’d created the new set-up, I found myself subconsciously moving my hand with the mouse to the right through sheer habit, so I had to place an object in its way to remind myself to keep it in the new alignment. Having one’s arms (and hands) face inward is actually even better for the body. That’s why some ergo-dynamic keyboards are made into  a pyramid shape, to further promote  proper alignment.

I’m back on track to recovery now. This one adjustment barely scratches the surface of the plethora of different alignment problems that can happen in any work place. If you have any developing pain somewhere, first try to figure out what is causing it, and then fix your environment to prevent the injury – especially if it involves an activity that you do for very prolonged periods of time.